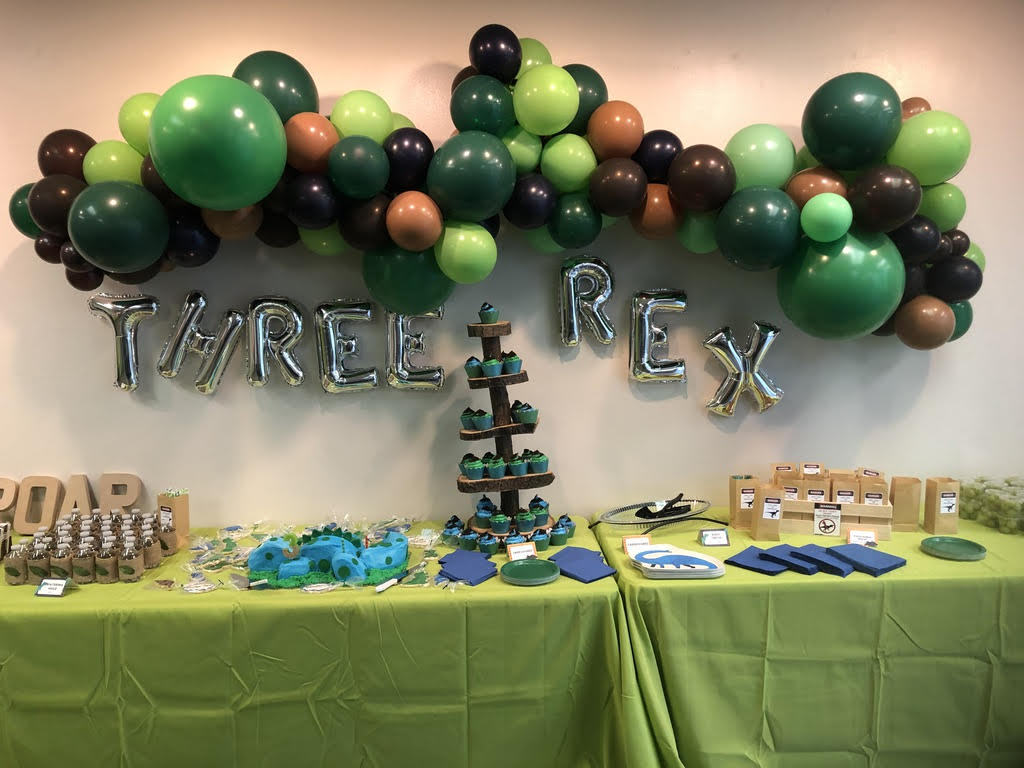 So in keeping with our “year of celebrations,” Deuce’s party was next on the list. For his first birthday, I did a “Wild One” theme, but let’s be honest, the first birthday is really more about the parents than the kids. So for his third birthday, I really wanted to do a theme that was representative of him and his likes. He’s a huge dinosaur fan, so I thought what could be more fitting than a Jurassic Park “Three Rex” theme. The Jurassic Park portion of the idea was really an ode to my husband since that’s his favorite movie franchise. I had soooo much fun planning this party!

The first thing I had to determine was if we would have the party here at our home or at a venue. His birthday falls in early November, so the weather can always be a crapshoot in Texas. For his first birthday, we had it in the backyard, and I had anticipated 60-degree weather, and it turned out to be 85 and windy. The next year when we didn’t have a party but took him to a petting zoo it was cold and rainy. I was worried about it potentially raining and having to do a plan B if we had to move the party inside, so I focused on venues that had indoor and outdoor rental space. I wanted to find a place that lined up with the Three Rex theme and also provided an area where we could make it our own.

Last year I remembered coming across the Heard Natural Science Museum, and Wildlife Sanctuary Dinosaurs Live! Exhibit and thought it would be an excellent activity for Deuce, but with being pregnant and sick that year, I just saved it in my back pocket. I was thrilled to find out that the Heard museum had a really fantastic space we were able to rent and also had the Dinosaurs Live! Exhibit occurring again during that same time of year!

This helped the entire theme come together. I rented Laughlin Hall for the party portion, which was a blank canvas and really helped bring things to life. Then we had a museum guide walk the kids along the trail to see the animatronic dinosaurs.

I love paper invitations. I know they are old school, but nine times out of ten, you will see me creating a paper invitation or sending out physical thank you cards any chance I get. With a Dinosaur theme and Deuce turning three, I had to walk a delicate balance of scary/not so frightening looking dinosaurs. Etsy is always my go-to for invitation design inspiration. What I love about it is I can contact the various artists directly and requests tweaks to their base templates that work with my vision. In this case, I found two really great artists to work with. Sams Dream Themes does altered backdrops. It was super fun to take photos of Deuce in our garage and send it to her to create such a unique image. The other, Rose Gold Occasions helped apply the custom image to her invite template. She also edited her template to accommodate all of the added information I needed to add for our guests about the Heard Museum. 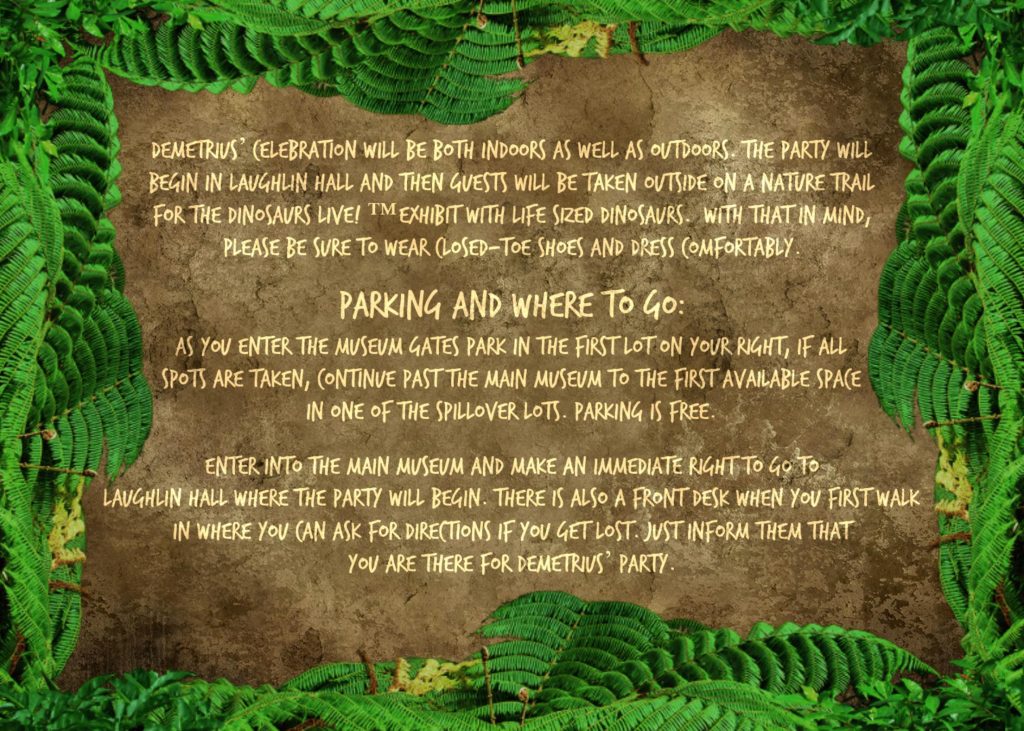 For the tables, I used brown table cloths from Tableclothsfactory.com and then purchased burlap style fabric from Hobby Lobby. I bought about 4 yards and just cut it down the middle to make wide, yet rustic table runners. I used large leaves from Amazon as placemats, and I topped them with a safari hat and binoculars for each child, from Oriental Trading co. I bought a ton of Dinosaurs from Dollar Tree and set them in the middle of the table to look like they were marching down the table. We also used the dinosaurs as weights for the helium balloons to accessorize the table.

I added Dinosaur tails to each chair setting that the kids could run around in and take home. 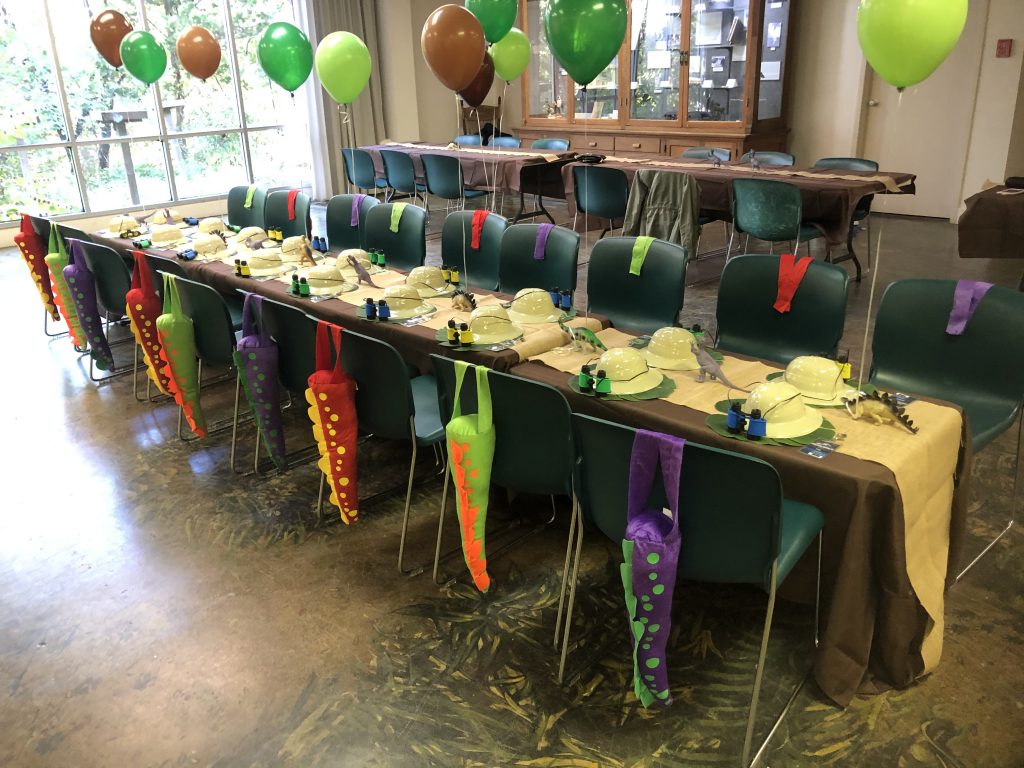 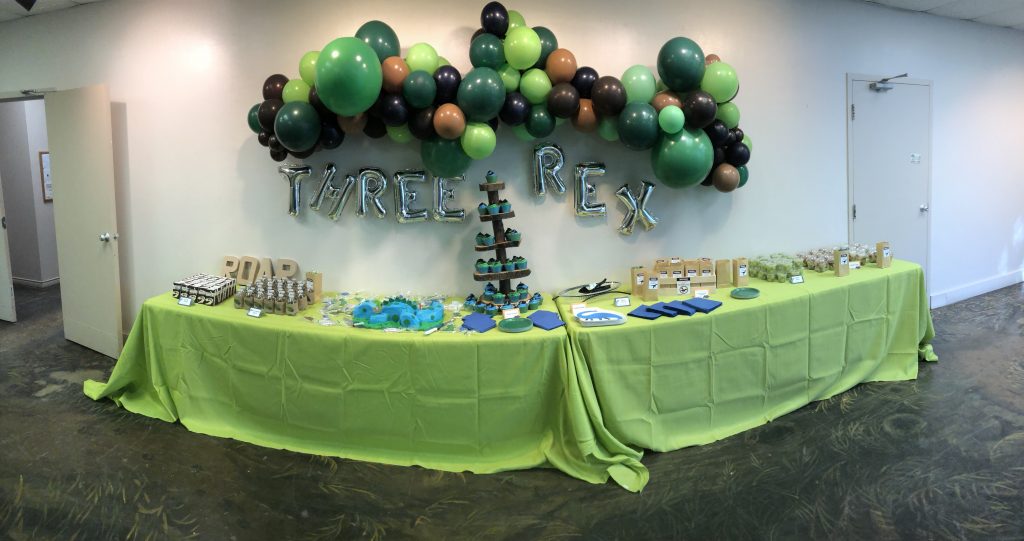 Pro Tip: If you are planning a party for younger children, make sure that you rent or that your venue offers tables and chairs that are small enough for children to eat and sit comfortably. This particular room didn’t offer kid-sized tables or chairs. The room is normally used for meetings and events that aren’t focused on toddlers, so I rented small tables that had adjustable heights. I adjusted the heights down so that they would fit closely to the adult-sized chairs – this saved me on having to rent both tables AND chairs.

When planning for younger kids, don’t forget about the parents! I used whatever leftover materials I had for the parent’s tables. Since my boys are both so young, we are in the phase where parents will stay at parties with their children, so I always factor them in for both seating and food. 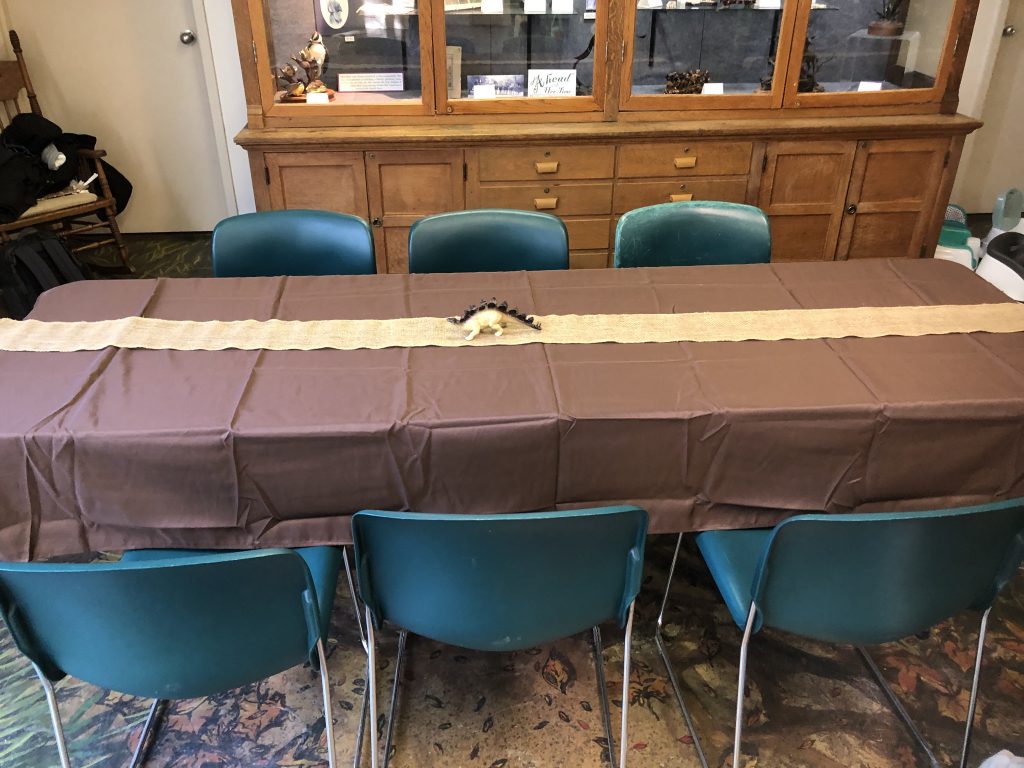 Food fit for a Dinosaur

I wanted to keep the menu simple – let’s face it, these are toddlers we are talking about! However, I also wanted to be creative with the simple basics. I found some great inspiration from Pinterest, and here is what I did:

Organic juice boxes that I wrapped in brown felt and glued die cut dinosaurs from Etsy on the front. I used double stick tape to cover the felt around each juice box, and the string helped to not only secure the felt but also gave it a natural feel.

Mini water bottles from Costco that I wrapped in brown burlap ribbon from Hobby Lobby, and I cut off small leaves from a Dollar Tree floral arrangement and glued them to the front

I made a snack mix combined with Bugles that looked like Dinosaur claws, with popcorn and cheddar flavored Chex Mix.  I mixed the ingredients in a large bowl and stirred with a spoon, then poured some into each bag. I got the craft bags from Hobby Lobby and print and cut out danger signs from an Etsy printable I purchased. I also glued larger versions of the signs on a craft crate so that it would look like a cage. 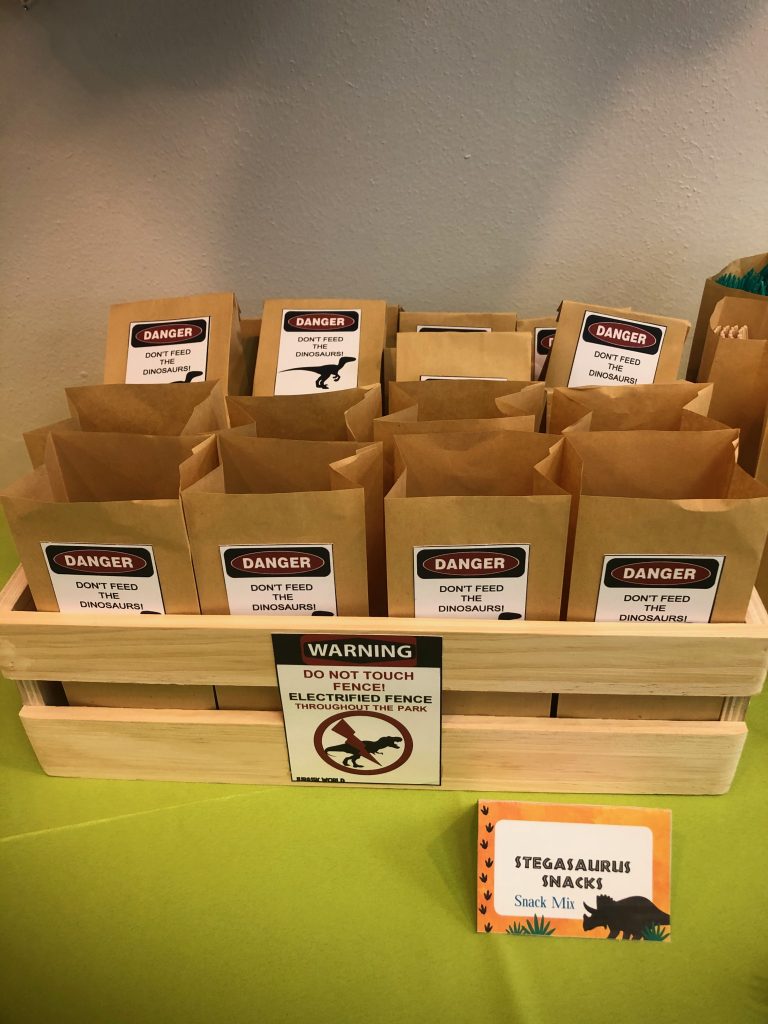 The day before the party, I went to Costco and picked up containers of grapes that I washed and put in individual cups with tops for both kids and adults. These were a hit and a secure and mess-free way to give the kids fruit.

My husband laughed at my little salad cups, saying that none of the kids would want a salad, but I try to make sure I have something for the adults too! So I used small cups with lids to fill with a premixed salad that I got from Kroger and then washed, added grape tomatoes, and small dressing cups with lids on top. 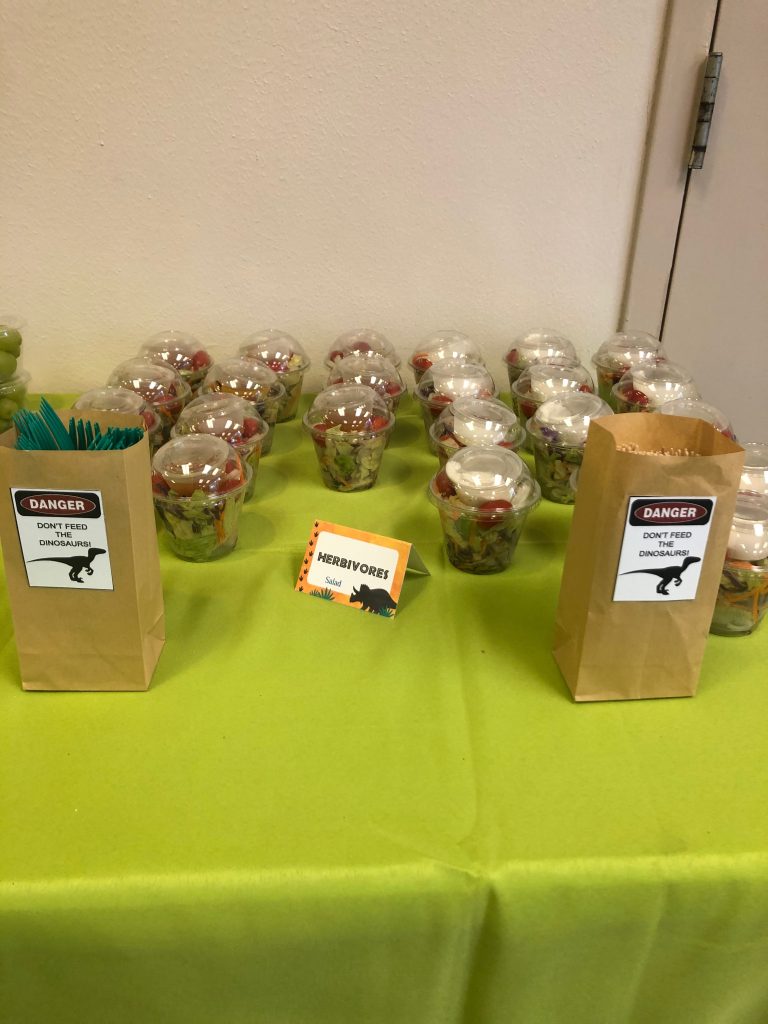 Deuce’s favorite nuggets are Dino Nuggets, so I got a box of these and used the kitchen in Laughlin Hall to heat them up right before the kids ate – sorry I didn’t take a picture. Still, the link shows what they look like; these or similar ones can be found at most grocery stores.

I ordered lots of cheese and Pepperoni pizza from Pizza Hut, which they delivered to the room, this made things easy!

One evening, when RG had already gone to bed and Deuce, and I were sitting on the couch watching TV, I was browsing Pinterest ideas for his party on my phone. I was sipping a glass of wine, and so I guess feeling a little too free-spirited. I asked Deuce which cake would he like (although I already had several great ideas) and so this is what he picked…I tried to show him other options, but he kept coming back to this rough-looking cake! LOL. So I, of course, gave my sweet boy what he wanted. For ease, I added cupcakes as well, which is what most of the kids picked anyway. Additionally, I worked with Sonya’s Sweets on his cookies. She always does such an amazing job, and really nailed it with these adorable Three Rex themed cookies. 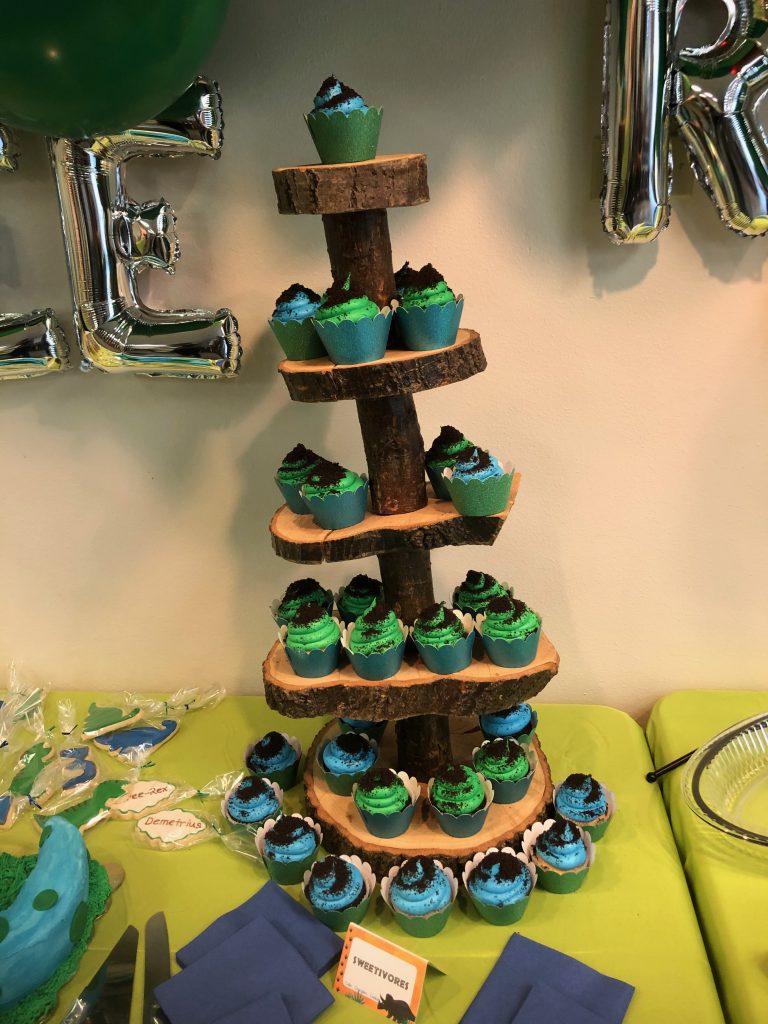 I wanted this to be a place where the kids could come and take photos together and play around. I purchased a printable poster from Etsy with his name replicating the Jurassic Park entrance sign. I then ordered a volcano backdrop from Oriental Trading, which included both a floor piece and wall piece, and also blow up dinosaurs and a jeep standee. For the pillars, I took 6 large boxes that I purchased from Walmart and then stacked three together and taped them with duct tape. I wrapped them in black construction paper that I had leftover from my husband’s Cigar and Bourbon party from the tasting tables. I then used brown felt and rolled it into cones for the flames, and yellow, red, and orange tissue paper for the flames themselves. 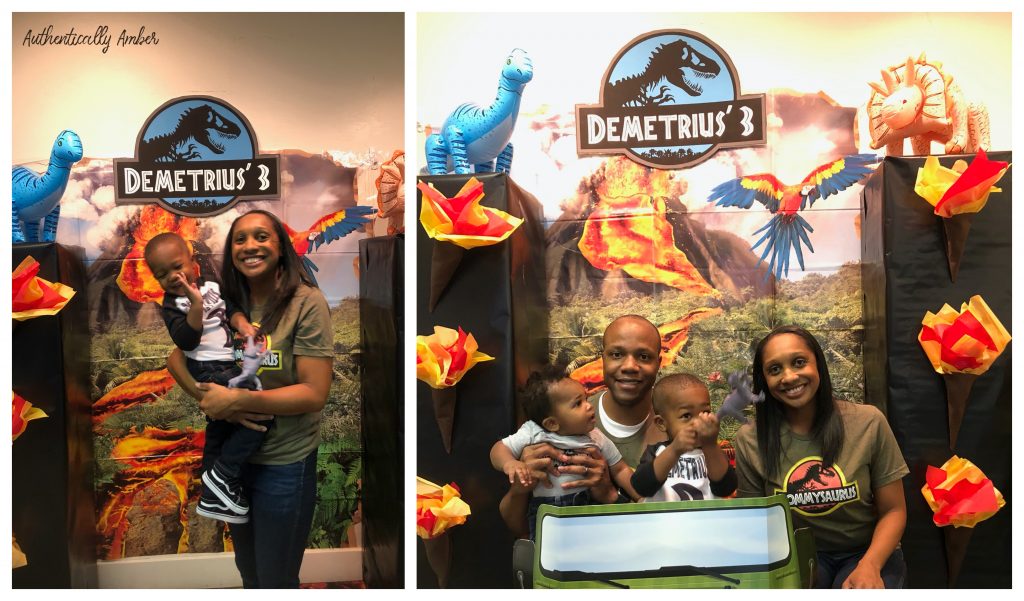 What I could’ve done differently: I recommend you build the pillars on site! I was trying to get everything done in advance since my boy’s parties were two weeks apart. The amount of big stuff I had to carry to the venue required us to rent a truck at the last minute because we couldn’t fit everything in my midsized SUV.

I set up a favor table and gift table next to the photo booth. I ordered bright green table linens from tableclothfactory.com. I decorated the tables with some Dinosaur themed photos from Hobby Lobby and the amusing picture of Deuce from his invitation.

I’m not going to lie, I was probably more excited about these favor bags than the kids were. I found adorable Dinosaur cut-outs and tags from Etsy. I then ordered Dinosaur shaped crayons and sunglasses from Oriental Trading. I found mini Dinosaur coloring books on Amazon and ordered a case of Haribo Dinosaur gummies from them as well. You can also find these at Dollar Tree, but I found that the price per case was a little lower on Amazon. 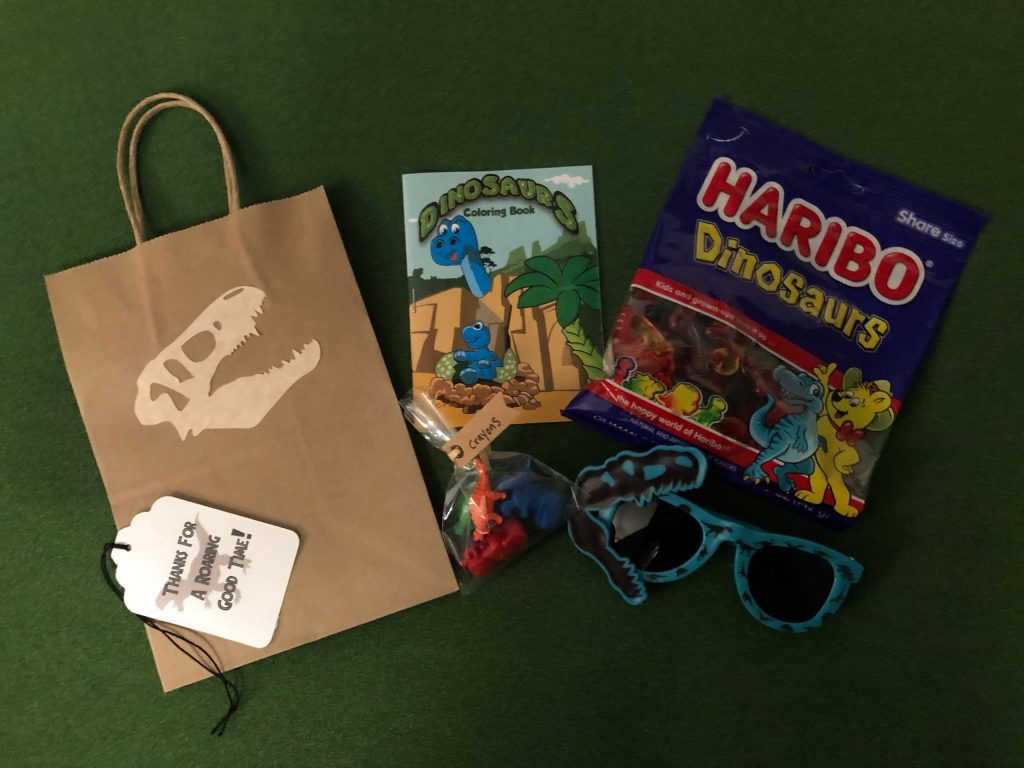 I reached out to a balloon company called The Balloon Fairies to set the scene with balloons I found inspiration on from Pinterest. They did a fantastic job, and I loved the 3 Rex and Dinosaur that sat above the favor table. 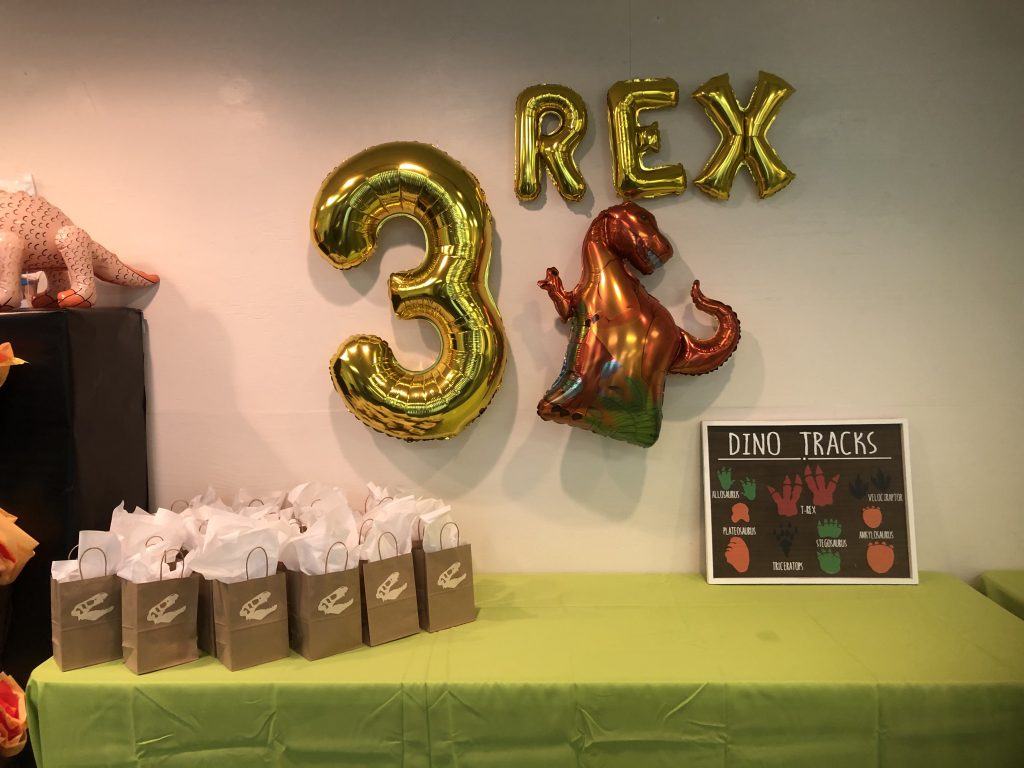 Safety Tip: Once I saw the crayons in person, I realized that they sort of looked like small candy. I added the little flag labels and wrote “crayons” on each one so that it would be clear – at least to the parent – that these weren’t editable.

The Heard museum hosts an annual Dinosaurs Live exhibit September through February each year, which encompasses life-sized animatronic dinosaurs along the trails. Even if you’re not doing a Three-Rex themed birthday party, this is an enjoyable place to take your kids for a day out and costs about $9 per child to enjoy the trails.

If you have older kids, they also do a “Halloween Dinosaurs come alive” night, which can also be an entertaining activity.

All in all, our little Three-Rex had a fantastic time. I really hope he one day can remember this party. If not, he will at least have the photos. Seeing the smile on his face made it all worth it. 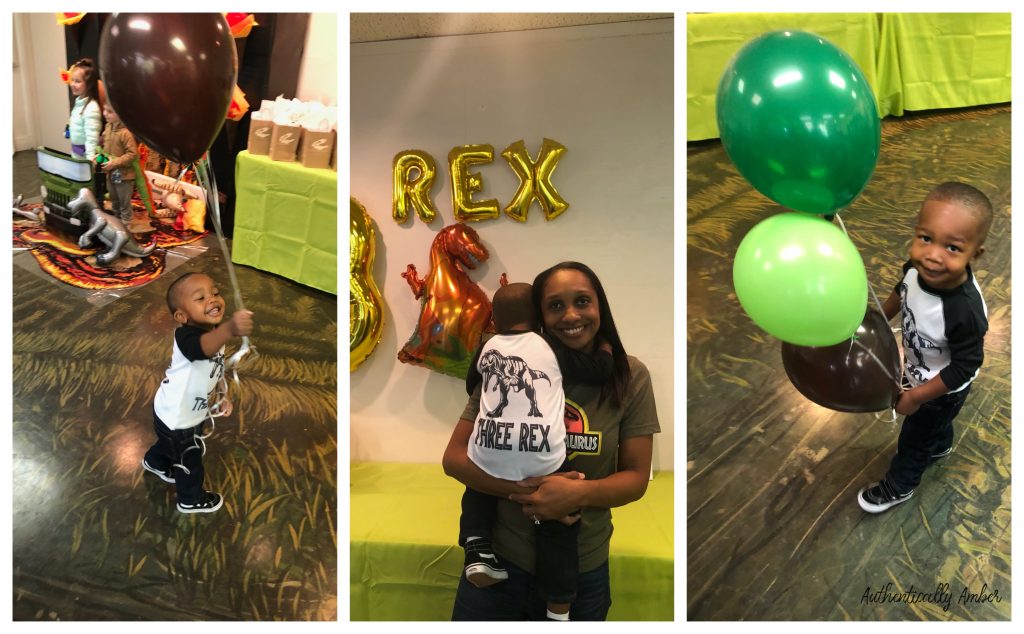 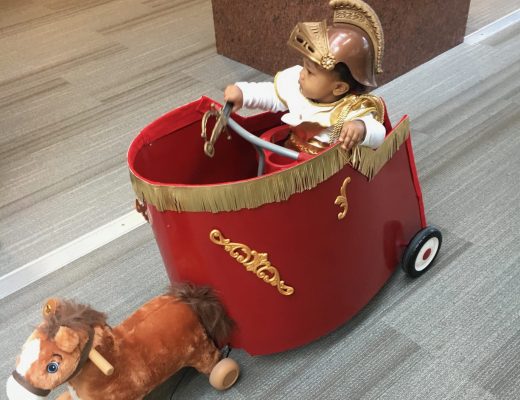