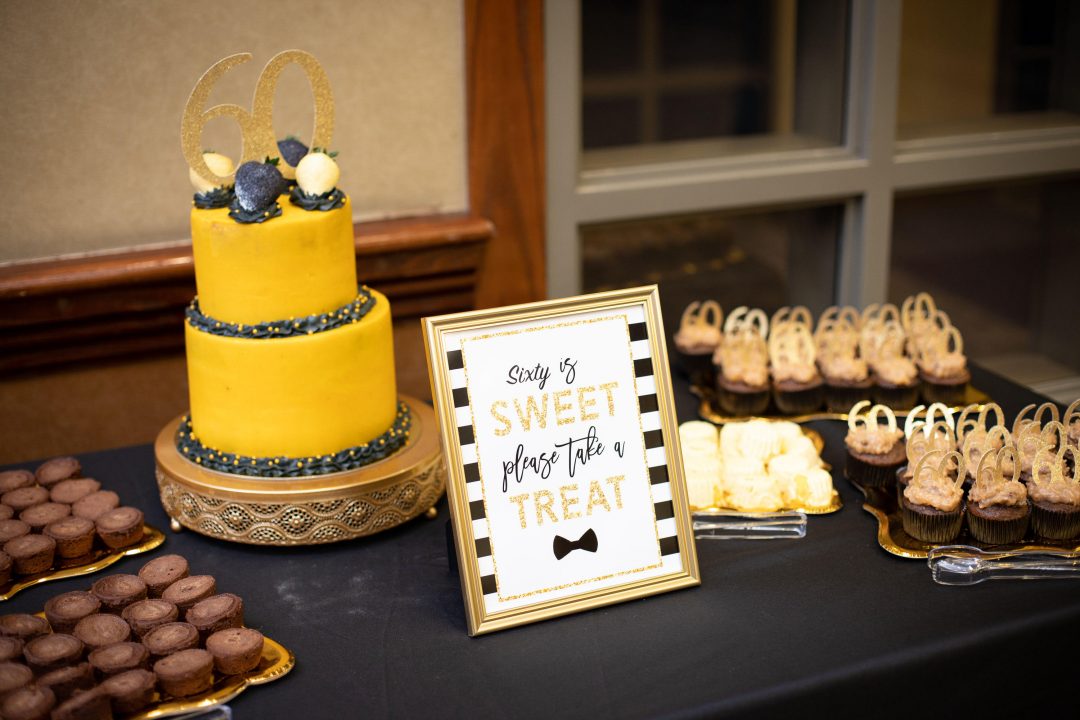 I have been keeping this party under wraps for so long, and I’m so excited for the opportunity to share it!

About a year ago, my sister and I decided to throw my dad a 60th surprise party. My dad is a no-frills guy, and we knew if we asked him if he wanted a party, he would’ve said no. My dad has had very few parties in his lifetime and is such a hard worker, and he never asks anyone for anything.

One of the challenges that I had was helping to plan a party in California from Texas. My sister did the groundwork and found the perfect venue at Central Park in Rancho Cucamonga. We rented the David Dreier Hall, and this venue was perfect because the room was large. Also, the facility allowed outside vendors, which is always my preference, since it enables you to customize, make the space your own, and bring in the caterer of your choice.

Here are some tips on how to put together a surprise 60th, while not breaking the bank!

Notify out of town guests early

We sent our out of town family and friends notification of the party via email four months in advance to give them plenty of time to make travel arrangements.

Establish a point of contact for out of town guests

We established a point of contact for all out of town guests to ensure discretion and fewer people talking about the event.

Send Formal Invitations two months in advance – the less of a digital trail, the better

We sent formal invitations out in the mail two months in advance. I did traditional RSVP postcards and had them returned to me in Texas rather than to my sister in California in case my dad stopped by her house. There was very little digital communication that he could’ve stumbled on from an accidental text or email that was forwarded by mistake.

Pro Tip: for my dad’s very close friends, I enclosed a small note in their invitation requesting that they put the invitation away somewhere. I knew my dad frequently visited their homes (in general, people tend to leave invitations out or post on their fridge).

Here’s a look at our invitations. I purchased an editable invitation off of Etsy, which provided the flexibility to make edits and changes as the plans evolved. 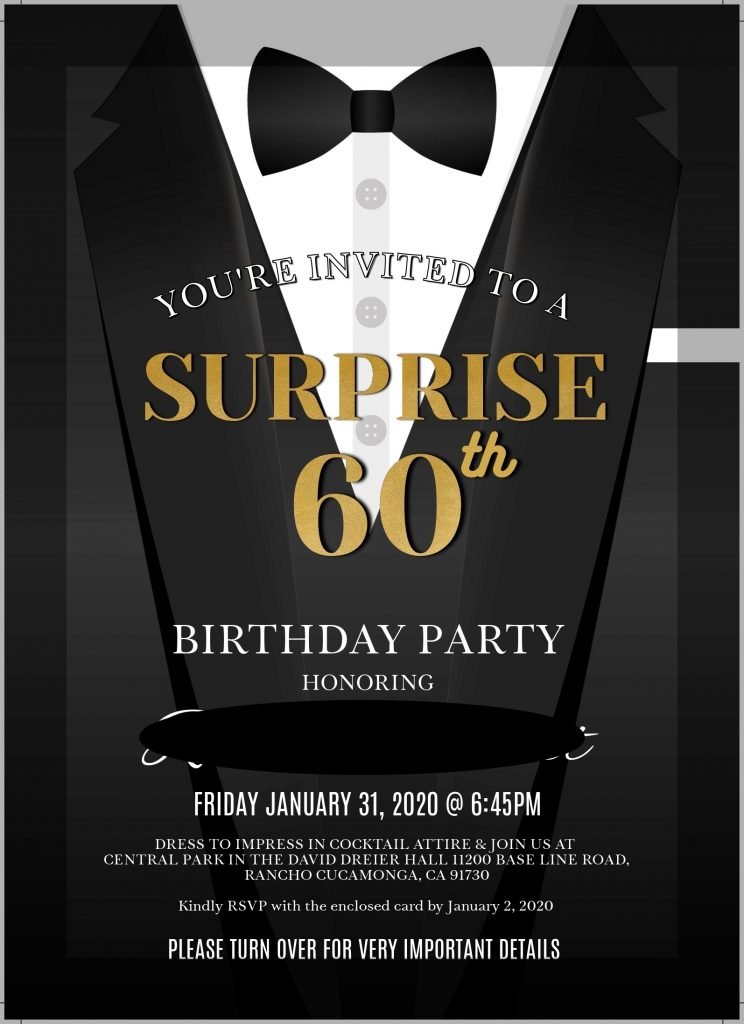 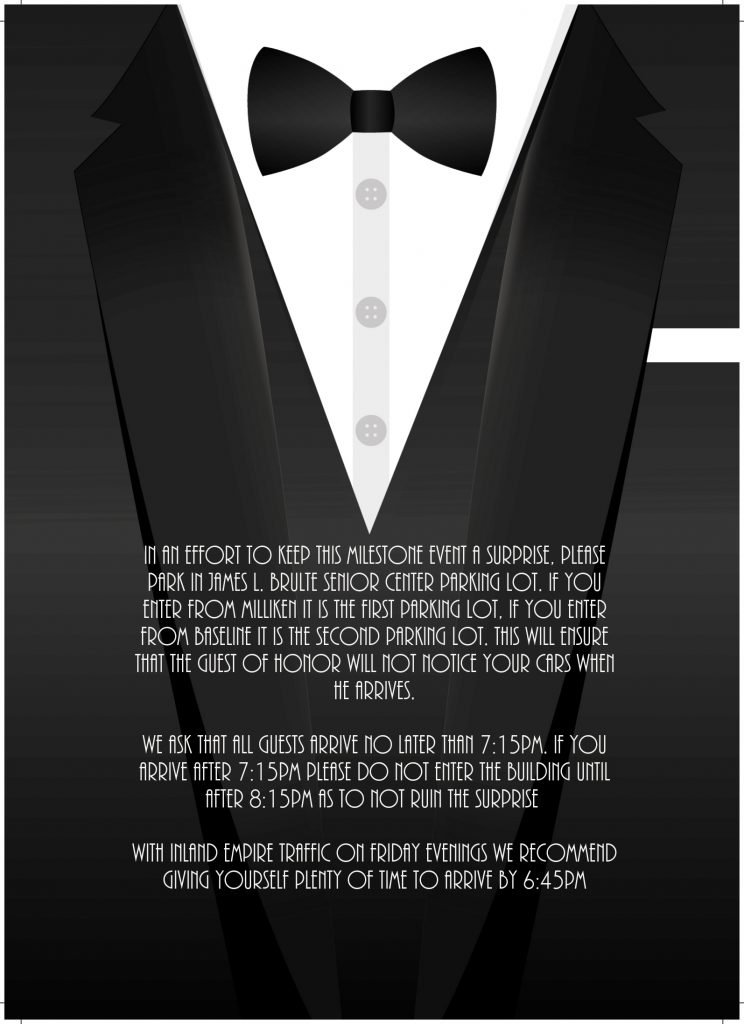 Give yourself plenty of time to research the most affordable printing options if you choose physical invitations. I ended up going with Simply to Impress because they were running a great promotion at the time.

Make sure you have a solid plan on how to get the guest of honor to the venue without suspecting anything.

Come up with a great alibi, and it took us quite some time to come up with something that would work to get my dad out of the house, dressed up, without any real knowledge of where we were going. In the end, I decided to make up a fictitious gala, where I was speaking about women in entrepreneurship. Since I’ve done speaking engagements in the past and my father has been present, he suspected nothing and was quite proud. He asked no further questions other than what time to be there and where.

As I mentioned, we began planning this party about a year in advance. I was continually looking for ways we could create the right ambiance for the celebration without breaking the bank. Thinking ahead allowed me to evaluate all of the events I had planned within the next six months and determine whether purchasing some supplies would be more cost-effective than renting if I could use them for multiple events. With RG’s (who’s named after my dad) party in November and my dad’s in January, instead of renting for RG’s birthday party, I purchased table linens, runners, and gold chargers. I planned for both parties to have the same color scheme.

Leverage what your venue has, then make it work for you

The space, David Dreier Hall, was great because it was a blank canvas. The venue provided tables and chairs and a commercial kitchen. The venue’s chairs were large and an odd green color; we knew we couldn’t use them in their current state, so we explored the cost of renting nicer chairs, or purchasing chair covers. I saw several parties that had been hosted at the same facility, and rental chairs had been utilized. With Garden to Chiavari chairs starting at a minimum of $3.50 each in southern California, I focused on leveraging the existing chairs with a twist. I found black spandex stretch chair covers on efavormart for $1.67 each!

Hire a crafty friend instead of a professional

While we were covered with table linens, runners, and chargers from RG’s party, the next big thing was centerpieces. Not being in the same state, I could not do my usual DIY plans for centerpieces. I explored several options; renting, floral arrangements, and non-floral candelabras. Ultimately, all of these options were expensive and still did not offer the look and feel we wanted to achieve. I then reached out to a family friend in California, Melanie Pruitt who is just as passionate about DIY projects as I am, and she agreed to help me. I showed her some Pinterest inspiration, and she nailed it! We used cylinder vases with three different lengths, she hot-glued black and gold ribbon to the tops and then filled them with water beads. The total cost of the centerpieces was $205 for 12 tables.

When filling a big space, use fewer materials that can make a significant impact

Melanie is also an expert with balloons, which is a blessing because balloon design can be EXPENSIVE these days! I wanted helium balloons throughout the room because it had tall ceilings, and I thought this would be a great way to bring down the ceiling height and make the room feel more intimate. She helped to educate me on the shortage and high cost of helium right now, making helium balloons expensive. We settled on clusters of three on each table, which was just enough, and allowed us to include some helium without making it too pricey. I also didn’t realize that balloon arches are made of non-helium, which helped us save as well. She created a beautiful balloon arch display that we used for the photo booth. 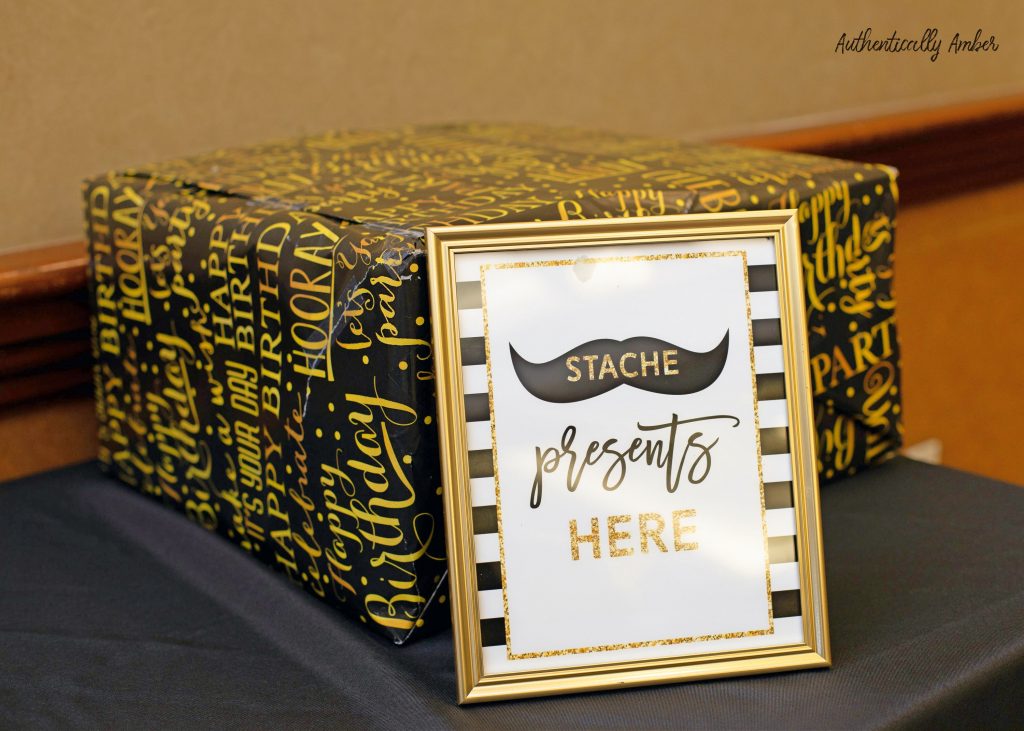 Etsy has excellent editable templates to enhance your theme. They range from $2-$10 and allow you the flexibility to edit what you need and print at home. The menu cards we used were printed on regular printer paper and hand-cut. 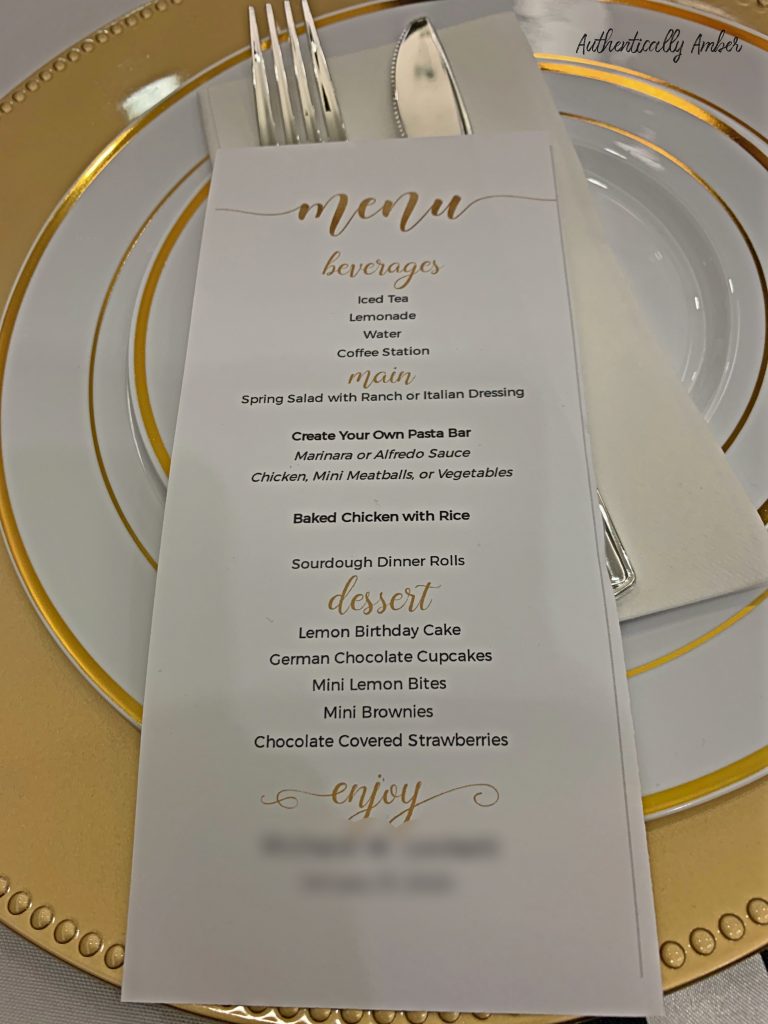 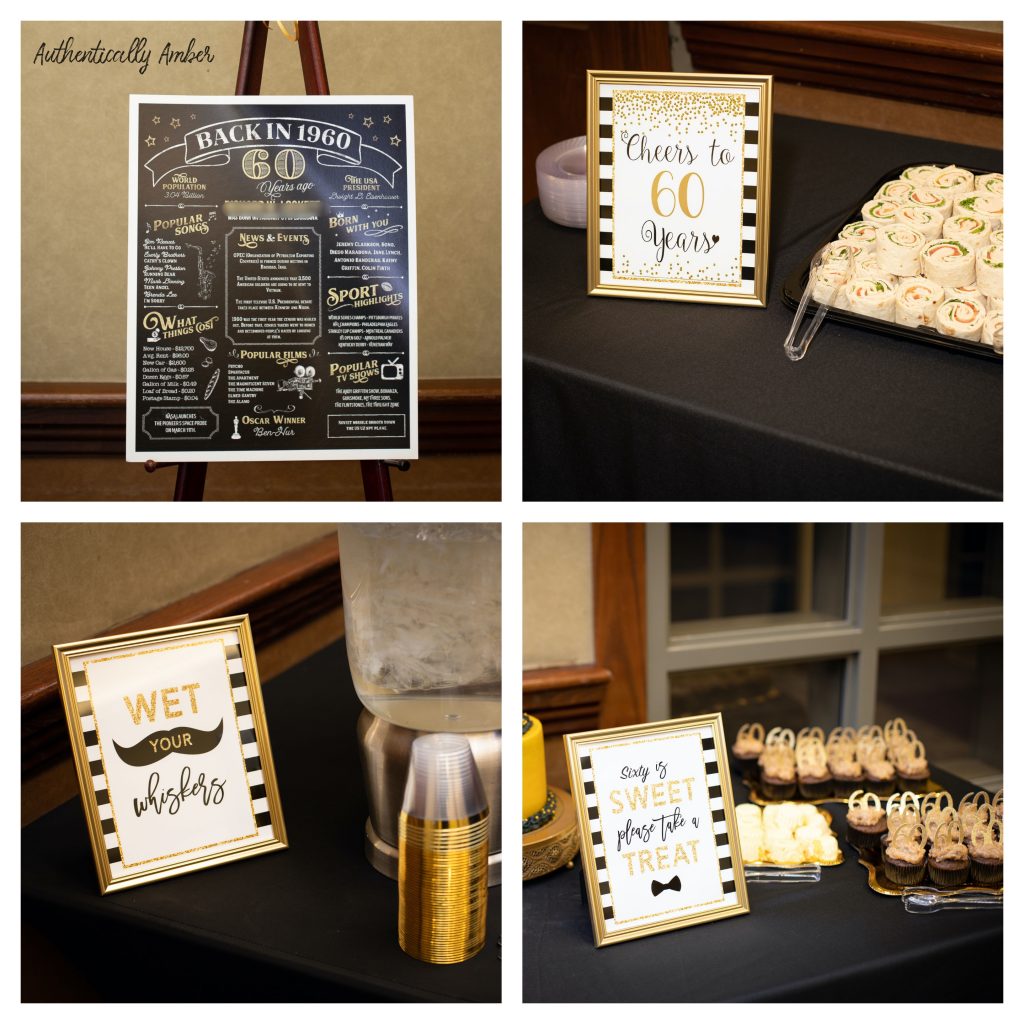 We also used signs for the dessert bar, beverage station, gifts, and photo booth to help guests navigate, and also to enhance the décor. I used gold dollar tree frames that were repurposed from RG’s party.

Invest your catering dollars in the main course, and research lower-cost options for appetizers and desserts 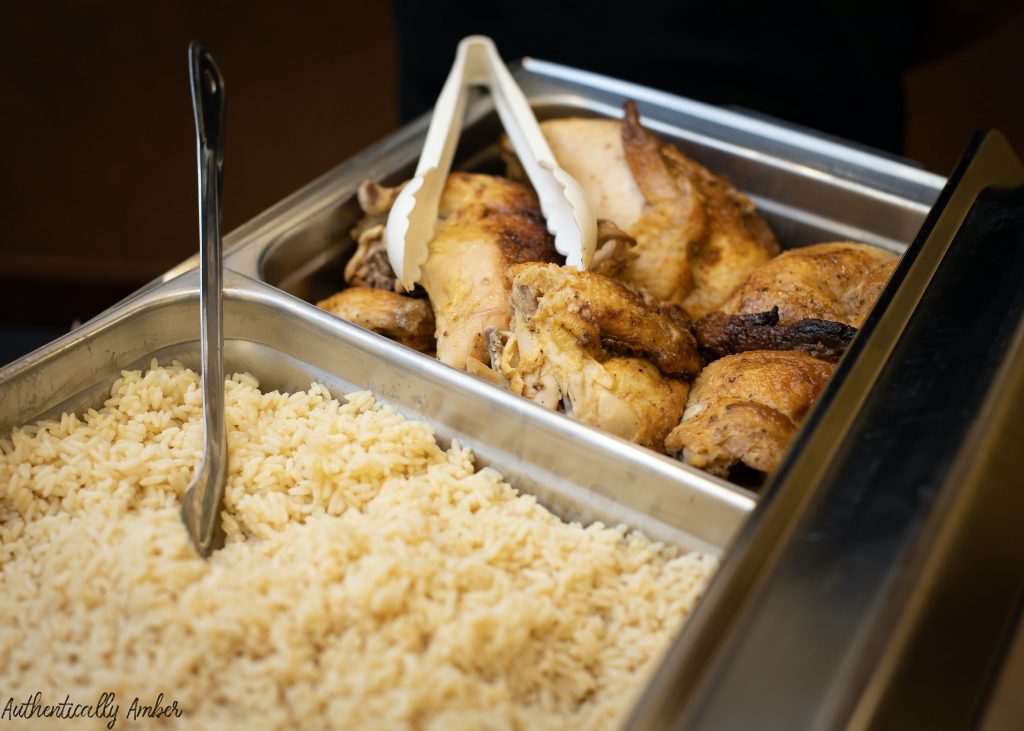 We used a trusted caterer, TC Catering, which my sister has used for several parties. 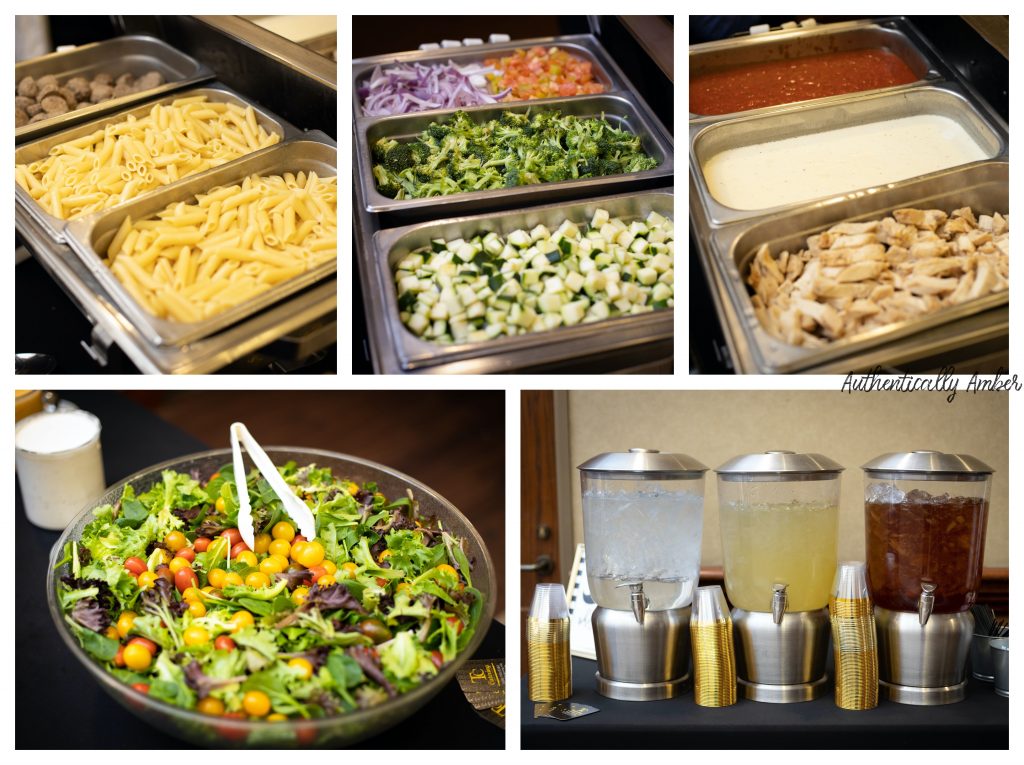 However, to keep the cost down, we leveraged catering for just dinner but purchased Costco trays for appetizers and our dessert bar. 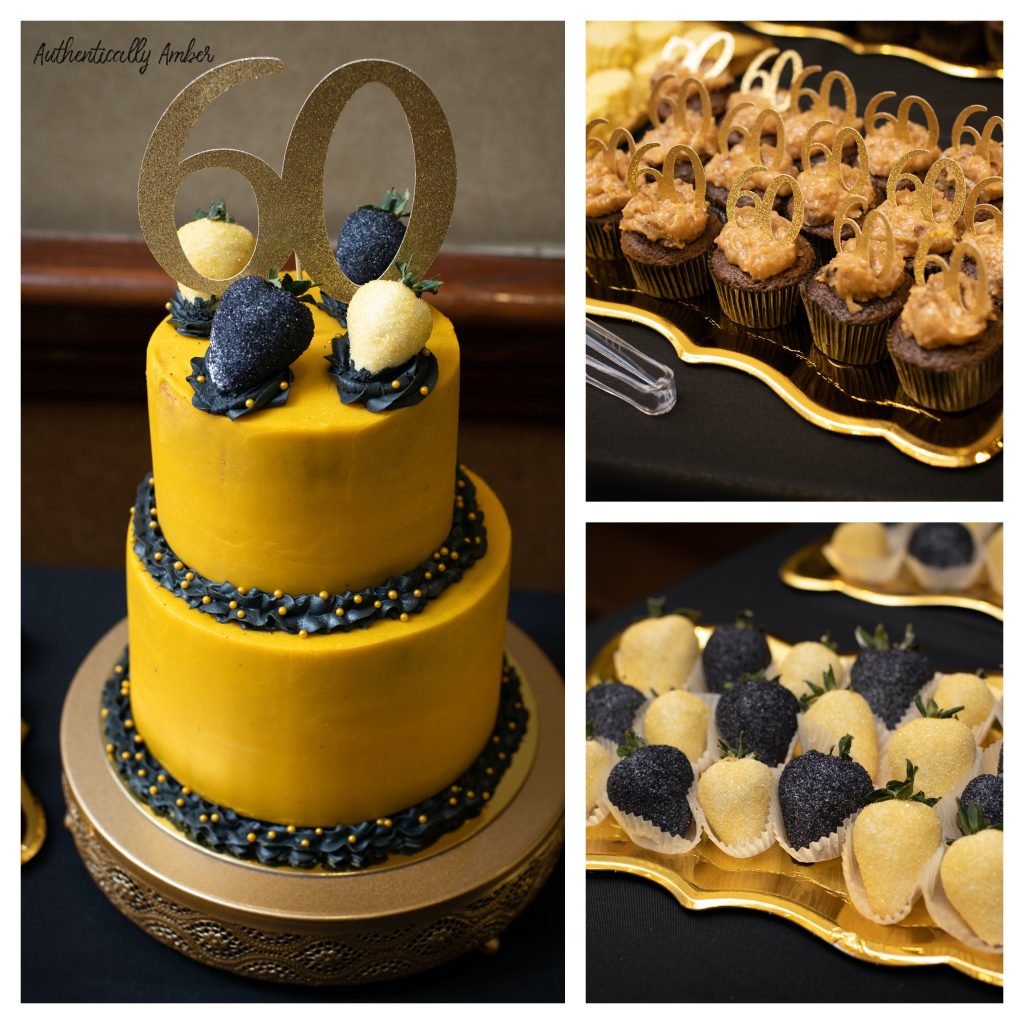 If the guest of honor doesn’t drink, skip the bar

Since my dad doesn’t really drink alcohol, we opted for a simple champagne and cider toast, rather than a pricey open bar.

Limit Videography and Photography hours, while capturing the moments that matter 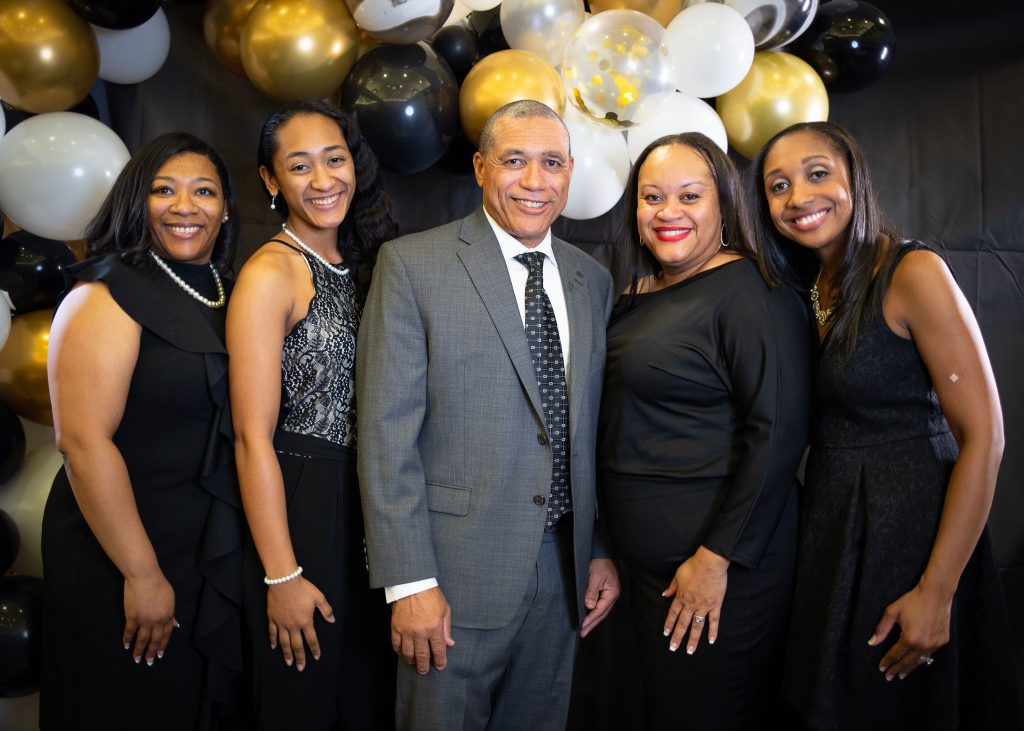 We wanted to make sure we captured his reaction for the big surprise on both photo and video. However, we knew it would be costly to hire both professionals for the entire evening. We had a videographer come specifically to film the “surprise” and my dad’s reaction to seeing all of his family and friends. We booked him for about an hour’s worth of time but had our photographers, stay for the whole night. We had two photographers, Jesse Galarza, and his associate Dereck Perez. One focused on taking pictures throughout the party and the other managed the photo booth. 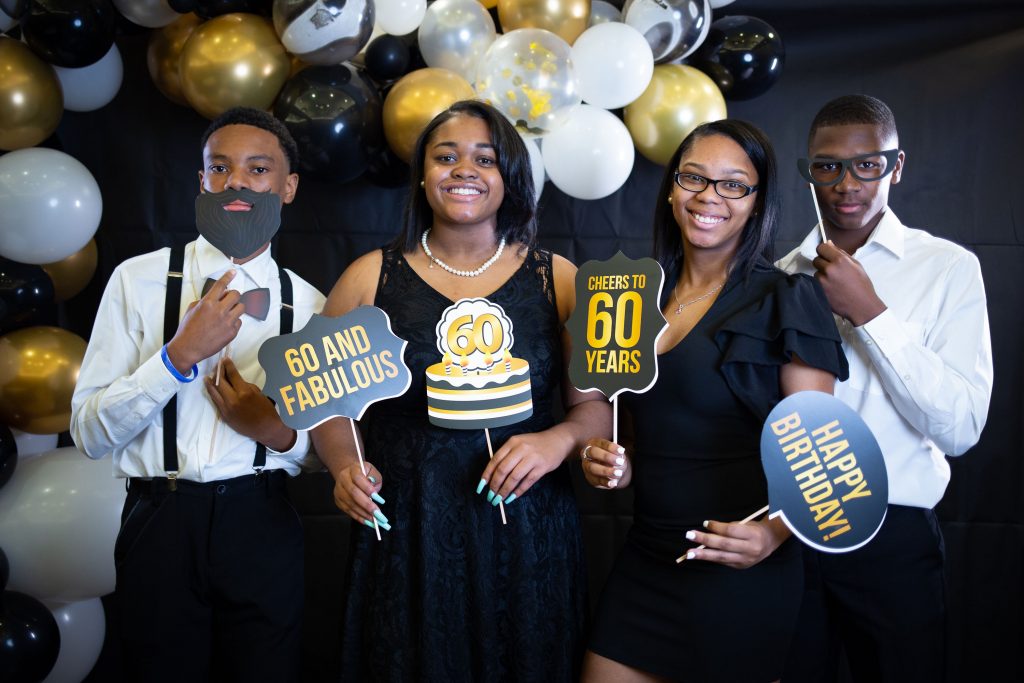 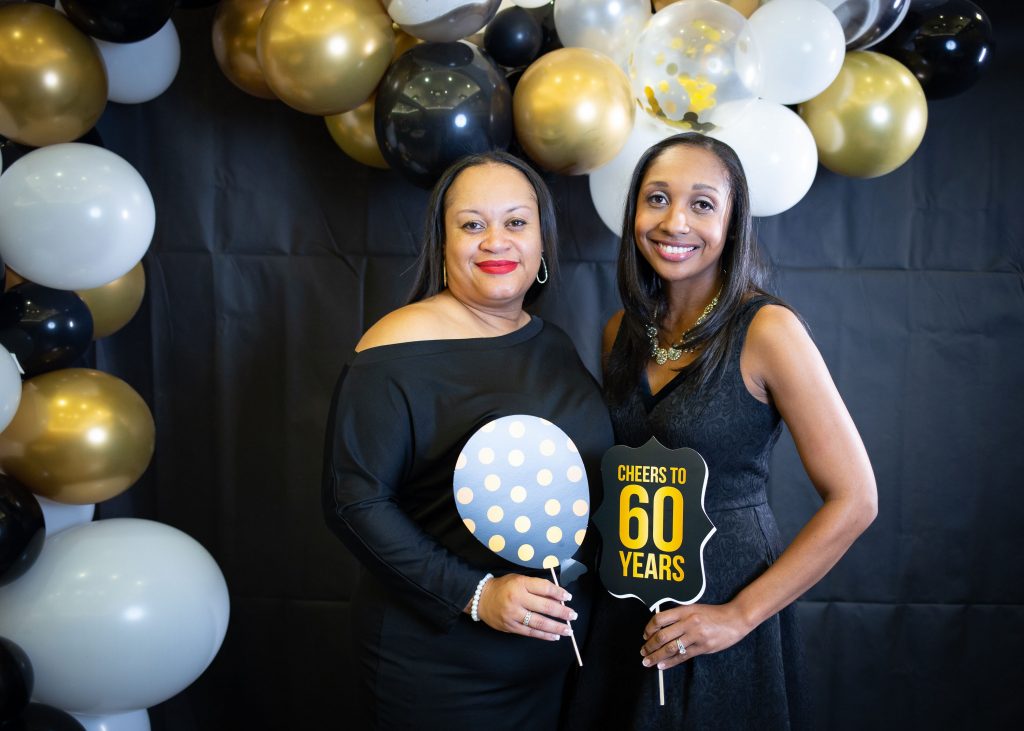 Pro Tip: When planning a surprise party, an open photo booth is a great way to stage a place for photos with the guest of honor. You don’t want the guest of honor to feel overwhelmed when walking around with everyone requesting to take pictures with them. Having a photo booth such as one like this, and a photographer or designated person to take photos lets guests know that this is where photos will occur. It also allows the guest of honor to remain in one place while their various friends and family take turns jumping in and out. I purchased a $35 backdrop with frame from Efavormart – for such a low price, I was impressed with the quality. It was durable, held up, and we will definitely be using it for other parties in the future!

Lastly, have fun and make memories!

I know once my dad walked in and we all said “surprise”, my sister and I exhaled a huge sigh of relief. It had been a lot of pressure putting together a party for 100 guests and keeping a secret for so long from my dad. We both felt like a huge weight was lifted off of us as soon as he entered the room and saw all of the people in his life whom he was closest to and loved the most there to celebrate him. I asked him during the party while dancing, “are you having a good time?” He hugged me and simply said, “all of the love in this room…I’m speechless.” 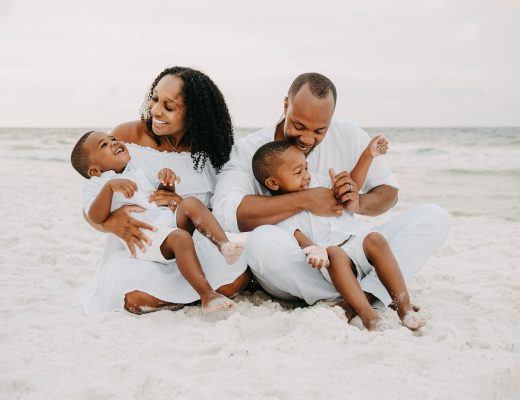 Traveling to Destin with Young Children 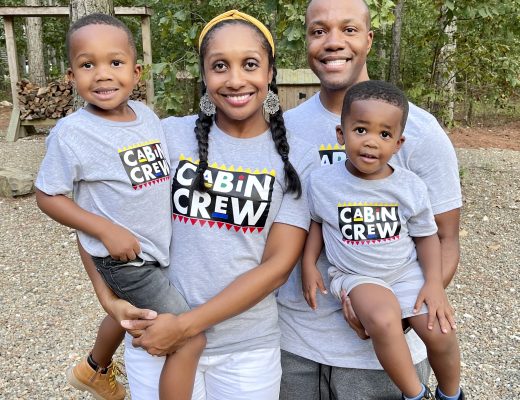 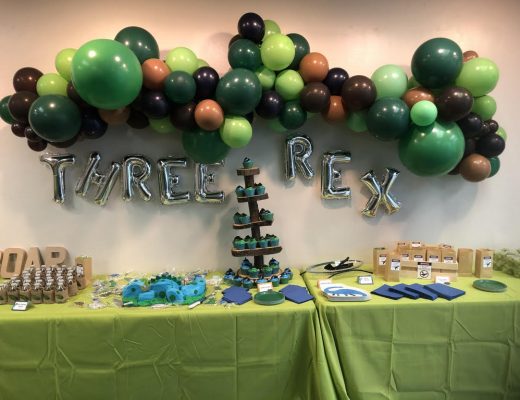