First up on the birthday docket this year was my wonderful husband, Demetrius. The year before, while I was extremely sick during our second son’s pregnancy, he really had to carry the load for both of us. Managing our small business, taking care of our then one-year-old son, and lastly, taking care of me. It was quite the undertaking, and with physically being able to do so little for his 35th birthday, I really wanted to make his 36th special. While it wasn’t a landmark year, after being sick for so long, I realized that every year is a gift from God and a reason to celebrate! I wanted to give him an opportunity to have a “guys night” since he and I already have our date nights. Still, most of the time, when we have friends over, he’s busy helping me with last-minute details. I wanted him to have the opportunity to really relax and enjoy a “guys night” evening with his friends. Additionally, my woman tribe and I are really all blessed with amazing husbands and fathers that go above and beyond daily.  I wanted the party to be one in which they would all have a great time.

To make the evening, both wife and kid-free I arranged to take the boys and spend the night at our cousin’s house who doesn’t live far away. With her help, we set everything up, then packed up the boys and left once the guests began to arrive.

With men, I’ve learned you have to keep things simple, so the most critical elements were really just great food, great Bourbon, and great cigars. 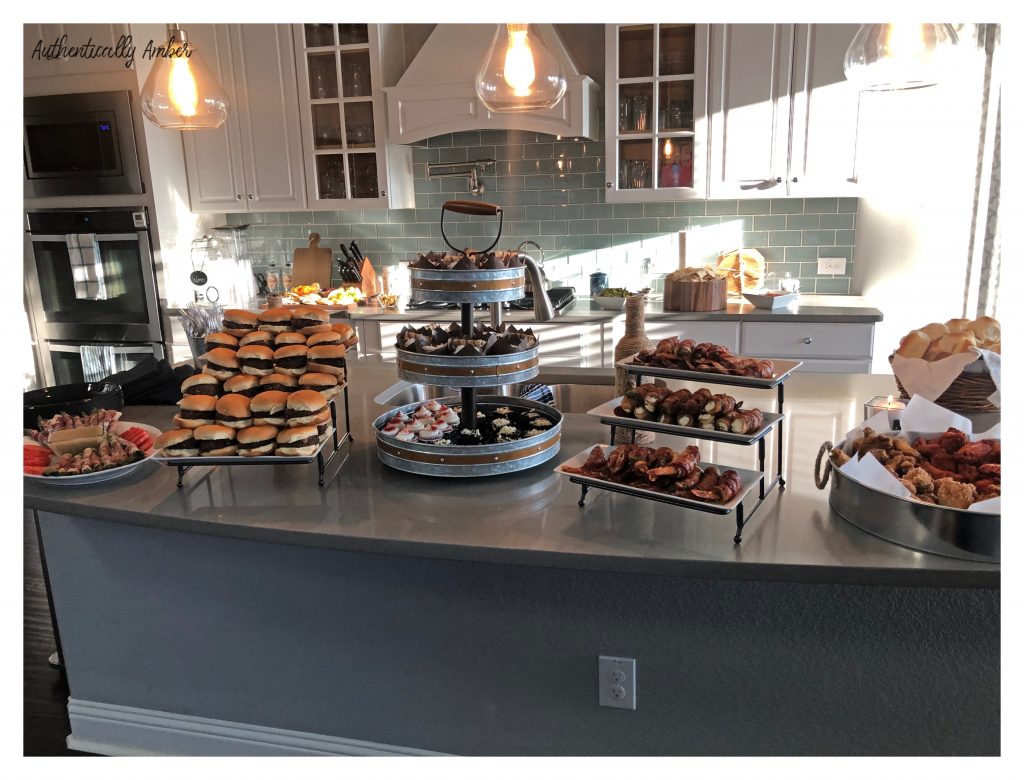 I focused on things that my husband loves and that frankly, most men enjoy, which is – MEAT! Demetrius loves Wingstop, so I ordered flavors of his favorite wings and plenty of them.

In addition to wings, I had smoked Gouda Beef Sliders, Grilled bacon-wrapped shrimp with jalapenos, Jalapeno Poppers, a cheese tray, and chips and salsa. In my 20’s, I would’ve made everything from scratch and been embarrassed if I wasn’t able to “humble brag” about making everything. However, the older I get, the more realistic I become and no longer feel that pressure to impress! I knew with a 5-month-old and a 2-year-old, time would not be on my side with prepping food. I leveraged Market Street catering for most of the menu items other than the wings. It worked out perfectly, I scheduled to pick everything up a couple of hours before the party began and it remained warm.

For dessert, I had an array of cupcakes. I wanted to make sure everything was easy to “grab and go” so that no one had to fuss around with cutting or slicing anything and would be easy to serve, given that I wouldn’t be there.

One thing I learned/Could’ve done differently: The cupcakes were barely touched. Given the crowd, I probably could’ve done with less cupcakes, since they were more into the food.

Instead of just setting out large bottles of Bourbon I wanted to do something a little different, so I set up a “Bourbon Tasting.” This allowed the guys to taste Bourbons from all around the world, and then from there, settle on their favorite selections for the night. I purchased a roll of black chalkboard paper from Hobby Lobby and a chalk marker. I wrote down each of the Bourbon selections on the paper and their taste profiles and origin. I also purchased disposable shot glasses from Amazon that they could use to taste each one.

Pro Tip: Don’t feel like you have to know a ton about Bourbon to set this up. In addition to simple Pinterest and Google searches, what really made the selections easy was having an expert at the spirits store to provide me with recommendations. I recommend a large store with a lot of variety. I went to Total Wine, and one of the department managers helped me select every bottle I purchased. Try to go during an off-time like during the week or on your lunch break at work if there is one close enough since the staff can be more helpful when they are less crowded.

For our Wedding in 2014, we had a cigar roller, but as with most weddings, the bride and groom don’t have a ton of time to enjoy many of the elements they’ve set up for their guests. So I thought this would be an excellent opportunity to have another cigar roller come out, as this would be a time in which he could really enjoy it! As I was searching online for local cigar rollers in the DFW area, I had some really, really fantastic luck. I came across Williams Cigars’ site and quickly booked them due to their reasonable price and the fact that they were willing to work with me on a private party. Raul, the owner, is actually originally from Cuba, and what I found out AFTER the party, was that he was a master cigar roller. So you can imagine all of the wife points I scored by having a master cigar roller from Cuba there to roll cigars for the guys!

Since I knew the guys would be outside for the majority of the evening (I was praying for no rain in April, and thankfully the weather held up). I wanted to set up the backyard so that it was comfortable, allowed them to play dominoes, hang out and talk, enjoy their drinks, etc. To keep flies at bay and also since I wouldn’t be there to replenish or clean up, I kept all of the food in the house. Still, it was close enough where they could grab their plates and then walk right out to the patio where the bourbon tasting bar was set up. I also wanted to keep them outside so that my house didn’t smell like a pool hall when I came back!

I rented black table cloths, card tables, and brown garden chairs, as well as some corn hole games in case the guys needed some extra competitive entertainment. I found inspiration on Pinterest for masculine centerpieces and used black candles from Hobby Lobby and vases from Dollar Tree, and cheap dominoes I ordered off of Amazon. I glued the dominoes to the candles for a completed look.

In order to make clean up easy, and also insure we didn’t have bourbon glasses everywhere when I returned, I purchased bourbon high ball glasses from Dollar Tree, and markers that write on glass from Hobby Lobby. I set them up on a table as the men entered with instructions to write their names on their glass and keep it with them for the night. At the end of the night, the glass was theirs to take home.

I also found great inspiration on Pinterest to do a cigar themed favor. I purchased more of the Whiskey glasses from Dollar Tree. I filled them with a bag of pistachios, a mini bottle of Bourbon, Piece of Ghirardelli Chocolate, Cigar cutter, and cigar. I let my husband select the cigars since he definitely knows more about them than I do. I thought they turned out really “cute,” but I’m sure the guys wouldn’t use the term “cute” lol.

Overall, from what my husband and some of the other guys shared with me, they had a great time. I was so happy to be healthy enough to do something like this for him and to celebrate his birthday in a big way.

If your planning your own Cigar & Bourbon, or just “Man-style” party, here is a list of things to consider/items that may be helpful. Feel free to leave any questions in the comments if you get stuck!

Water – for hydration and also to cleanse the pallet

Cola and lime sodas. Colas are great for mixing with various whiskeys

Keep things simple, but stick to dark color pallets that will compliment the Bourbon. I used blacks, browns, and golds:

Ghirardelli chocolate on the tables served as both décor and also an accompaniment to the cigars.

Brown paper shred for the glasses

Cigars of your choice